There are 2 WWII Japanese Surrender tours to choose from:

830am — 4 hour Half Day Tour, including some transport
9am — 2 hour Morning Walk

We will run these tours for up to 10 people in two sub-groups of up to five each. So do gather a group of up to 5 (or 10) people together and join us for one of these two fascinating tours.

The Japanese Surrender of Singapore – September 1945

This year we commemorate the 75th anniversary of the end of WWII so it is a good time to learn how it all came about and reflect on the many ways it impacted Singapore.

We are running both shorter (2-hour) walking tours and longer (4-hour) walking tours combined with transport. The first will focus on the area around Beach Road and the Civic District, especially the Padang, which was also very central to the pre-invasion war effort and the early days of the Occupation.

The longer tours will first go further afield to places such as Bukit Batok, the Old Ford Factory, Turf City and the sites of the Sime Road and Adam Park POW camps, before ending with Beach Rd, the Padang and Fort Canning as per the shorter tour.

We will meet at Bukit Batok to see the site of the Syonan Chureito, a monument to Japanese fallen soldiers before walking a short distance to the former Ford Factory, where the February 1942 surrender to the Japanese took place and which is now a WWII museum. From there we will be transported to Turf City —the old Turf Club—where the first encounter took place between the Japanese and a British soldier (who literally parachuted in) during the “stand off” period between August 15, when the Emperor of Japan announced their country’s surrender, during the Sept 12 formal ceremony.

We will then drive to the Adam Road area to talk about the POW experiences and the last camp to be “liberated”. Next we will drive to Beach Road and the Padang (via the old Raffles College site) to follow the shorter tour itinerary on foot, ending in Fort Canning.

Starting in Beach Road we will briefly explore the old 1930s Army buildings there (now part of the South Beach development) and then cross to Raffles Hotel. It was often used by the Japanese during the Occupation—when it was known as Syonan Ryokan, incorporating ‘syonan’ (“Light of the South”), the Japanese name for occupied Singapore, and ‘ryokan,’ the name for a traditional Japanese inn and was the site of an infamous incident in August 1945.

We will then walk to the far side of the Padang to see various war related memorials and look back to the old City Hall, now part of the National Gallery, where the actual surrender by the Japanese Lord Mountbatten and the other Allies took place on 12 September 1945. We will visit to actual “surrender room,” ie the City Chamber and the steps on which Mountbatten made his speech.

The tour will end at Fort Canning, with its many layered military history, where those who wish to then take a tour of the Battle Box may do so (open Saturdays, not midweek)

Superb “WWII: 75th Anniversary Japanese Surrender Tour” with Jane’s Tours guide Bibi. Bibi provided us with a detailed & informative history, compellingly told. Combination of walking and driving the tour flowed smoothly and really captured the history of Singapore during WWII – quite amazing how much ground we covered and saw in the 4hrs….. fantastic way to spend a morning out and about, enjoying Singapore’s history & Bibi’s company. Highly recommend Jane’s Tours and this tour. Already signed up for another tour and will be doing many more for sure.

On this half-day tour, Bruce took us to many sites of the 1942 Japanese invasion of Singapore. It was an interesting and detailed account of an aspect of the war that I was unfamiliar with, and Bruce answered everyone’s questions thoroughly. Based on this tour, I would highly recommend using Jane’s, as I plan to on future visits.

My husband and I went on the World War II tour last Saturday conducted by guide Jimmy Sim. Very informative with stops at historic sites and also an opportunity to see some of the surprisingly rural parts of Singapore that few tourists — or locals — know about. Jimmy was very knowledgeable, made the details of the war come alive. 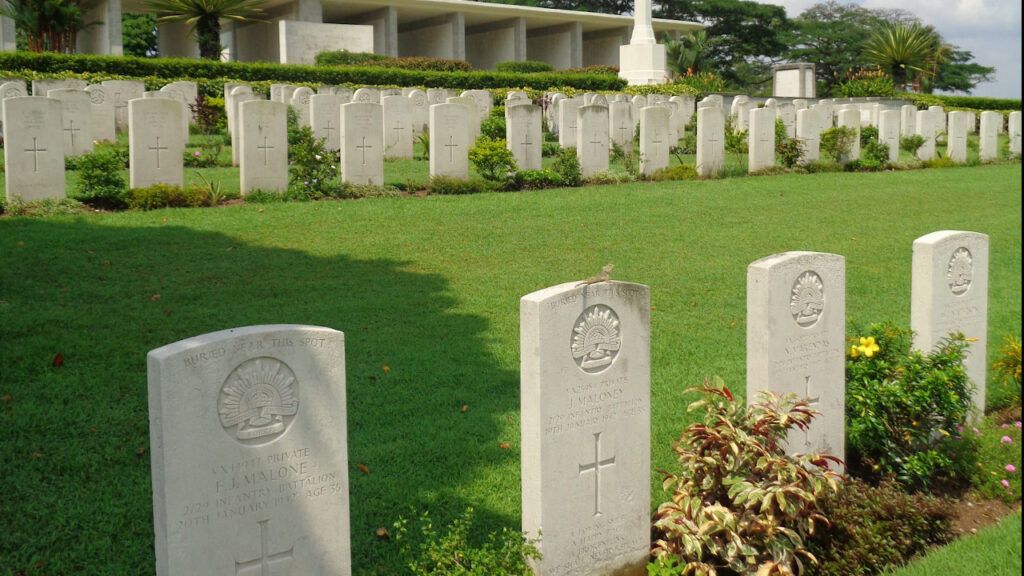 Join one of our expert military guides to learn about the invasion and occupation of Singapore by the Japanese during WWII. Hear personal recollections of the impact of the war years on families, the various communities and the country as a whole.