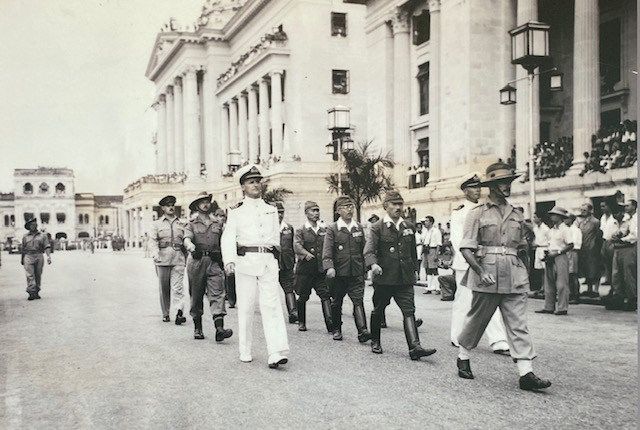 The Surrender of Singapore

Home > Blog > The Surrender of Singapore

So often we associate “The Surrender of Singapore” with the ignominious surrender to the Japanese on 15 February 1942. However, the surrender by the Japanese on 12 September 1945 is an equally important date in the island’s WWII story.

As we commemorate the 75th anniversary of the end of WWII this year,  it’s a good time to learn how it all came about and reflect on the many ways it impacted Singapore.

But first, a little context. Japan was the last nation in the Tripartite Pact (Germany, Italy, Japan) to surrender in WWII, a conflict that cost over 60 million lives and led to the emergence of a new world order—the Singapore surrender was the last major ceremony of its kind.

Surrender was anathema to the Japanese Imperial forces inculcated with bushido pride and a belief that it was better to die than be taken prisoner. Indeed it took two atomic bombs in early August and an Emperor’s broadcast on 15 August to finally achieve this. Yet, a peaceful transition of power was far from guaranteed with dissenting factions attempting to continue hostilities.

Despite communications with the Japanese in Singapore being virtually non-existent making the situation somewhat unpredictable, things moved quickly from then on. With the Allies adapting a previous plan to invade Singapore to deal with re-occupation.

So it was into this fraught, tense and unclear scenario Mountbatten ordered Captain O’Shanohun, a staff signals officer, to parachute into the Bukit Timah Turf Club at dawn on 19 August. The Captain discovered that while the Japanese intended to surrender the concerns had been well founded. Only the previous day, the commanding officer in Singapore, General Itagaki Seishiro, expressed his reluctance to follow the Emperor’s orders to Field Marshal Count Terauchi (Mountbatten’s equivalent). Teruchi ordered Seishiro to obey the Allied commanders’ surrender instructions. He did, informing his generals and senior staff on 22 August that they would have to obey the Allies and keep the peace until they arrived. That night it is believed 300 Japanese officers met at the Raffles Hotel for a farewell party, at the end of which many committed suicide.

The stage was set for surrender with detailed operational terms agreed aboard HMS Sussex in Keppel Harbour on 4 September. With the local population unaware of these momentous events, the first Allied troops (the 2/1st Punjab) came ashore on 5 September to find no one there to greet them. Upon arrival, they fanned out from the docks to occupy key positions, including the PoW camps. By midnight, the British and Commonwealth troops were back in charge and 35,000 Japanese troops had been evacuated to prison camps in Johor.

The concluding scene in this drama took place on 12 September at the Chamber of the then Municipal Building, subsequently the City Hall, and now part of the National Gallery. But even then there was a last-minute hitch to the meticulously planned official surrender ceremony—Terauchi, key signatory of the surrender, was too ill to attend. Mountbatten was suspicious of a stalling tactic, but Terauchi had indeed suffered a stroke, and Itagaki was appointed to sign on his behalf. Hence it was he who surrendered the Japanese Expeditionary Forces in the Southern Region to Admiral Lord Mountbatten, officially restoring Singapore to the British Empire. 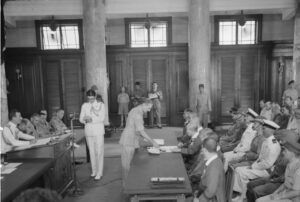 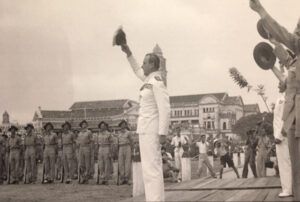 Singapore has more layers to its history than many people realise. It’s a nuanced, page-turning story of settlement, immigration, and occupation. A British settlement from

The team of guides at Jane’s SG Tours doesn’t just talk about Singapore’s cultural diversity, they embody it. A melting pot of nationalities and circuitous

We still don’t do Merlions

When she started Jane’s SG Tours back in May 2016, above all else she knew her mission was to offer something different. Whether she’s guiding

Jane shares thoughts and memories of her friend Mrs. Jean Marshall, who passed away March 29, 2021, at age 94. I am so saddened to

The colonial heritage homes of Singapore, colloquially known as Black & White houses, exert an endless fascination. Evoking nostalgia for a bygone era their both

A Woman’s World in Early Singapore

As we celebrate International Women’s Day, let’s look at some of the women pioneers in Singapore’s early history. There is no question that life was