The tour has 2 options to choose from:

Jane’s ever popular Tiong Bahru walking tour. Touted as one of the world’s coolest neighbourhoods by Vogue, called “Singapore’s hippest hood” by CNN, and known by locals as one of the most happening areas on the island, everyone loves Tiong Bahru’s old-world charm.

Visiting this quaint neighbourhood, you immediately notice an intriguing mix of old and new. The transformation from swamp to swank began in the 1930s, and some of the landmarks from that era still stand today, including the residential blocks and the first Monkey God Temple dedicated to the main character from the Chinese literary classic Journey to the West.

Our Tiong Bahru walking tour takes us around one of Singapore’s oldest public residential estates to explore pre-war and post-war architecture and learn about the history and stories associated with this charming and picturesque neighbourhood with its rows of quaint art deco buildings.

Discover Tiong Bahru’s rich stories of prominent pioneer community leaders and residents who were born in the air raid shelter during World War II. And, learn about the religion, customs, culture and food unique to the area and to Singapore.

Meet your guide at Bird corner beside the Link Hotel

Walking Tour of Tiong Bahru
Lovely tour – great way to spend a weekend. The tour guide was professional, knowledgable and incredibly friendly – sharing both great insights about the area and personal anecdotes. My husband and I really enjoyed the tour as it gave us a deeper appreciation this area of the city!

Thoroughly enjoyed my walking tour of the beautiful Tiong Bahru. The wonderful guide Lim brought to life the history of this gorgeous neighbourhood, with his depth of knowledge and personal anecdotes. It was a wonderful combination of art, culture and architecture.

I would highly recommend this tour for anyone wanting to learn more about the history of Singapore. Loved it.

Elaine, with a wealth of knowledge of her beautiful home country and her love for Art Deco and architecture took us through the quaint alleyways, past shophouses and the bustling local food outlets – we even managed to stop and grab a delicious Almond Tart! Hearing the stories behind the beginnings of Tiong Bahru also known as the “new cemetery” was fascinating. Learning the history and seeing the first stand alone “bomb shelter” and the only “air raid” shelter in Singapore gives this beautiful little area an even more reason to come and visit.

Jane and Elaine thank you so much! We had a great evening and very much looking forward to booking our next tour with you. 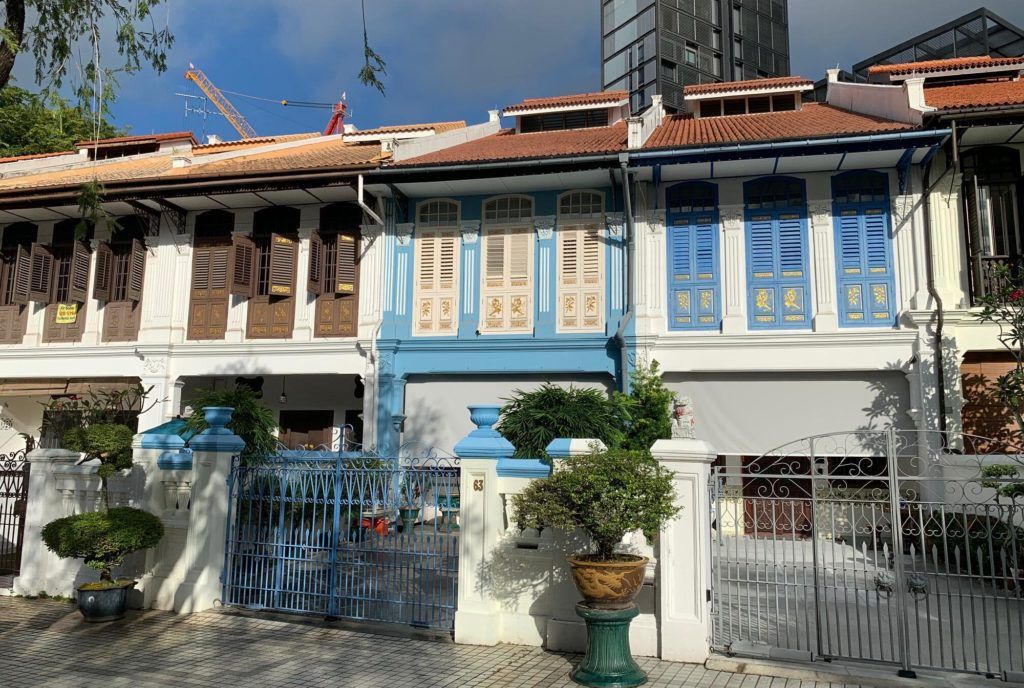 The name Orchard Road conjures up visions of gleaming high rise apartment buildings, glitzy shopping malls, and office towers filled with glamorous hotels and high-end restaurants. Dig a little deeper and you’ll find that there’s a rich history lurking among the monuments to shopping and consumption, with nearby gems like Emerald Hill providing oases of tranquillity.