Our “Secret Singapore” tour of historic Fort Canning and its foothills will uncover the many layers of this fascinating hillock where much of Singapore’s early story took root.

We’ll check out an old lighthouse that helped guide ships into the harbour in the first half of the 20th century and also learn more about an imposing memorial to a young child.

Follow us to a pair of mid-century gateposts that mark a Singapore institution that was once so very important, and nearby, to a 19th-century bell with a prestigious pedigree. And more!

*Please note the last 15-20 minutes of the tour will be conducted within the National Museum. Entry is free for SG citizens, PRs & FoM members, for others the entry fee will be $15 or $10 if over 60. Once inside National Museum you can stay as long as you wish and visit the many exhibition spaces.

When booking the tour you can purchase the new best-selling book “Secret Singapore,” by travel writer & heritage lover Heidi Sarna heritage blogger Jerome Lim.   This is as an ‘extra’ during check out for the special price of $25.  Your guide will then bring along any copies ordered on the day of your tour.

Meet your guide 15mins before the tour starts at:

As a resident of Singapore, I feel lucky to have been able to take advantage of more tours with Jane’s Tours than I can count. I particularly love the Tuesday walks exploring the different distinct areas of Singapore…including Tiong Bahru, Kampong Glam, Geylang and The Botanic Gardens to name a few. Jane and her team are knowledgeable without being over -facing; interesting in the telling of local stories and fun to be with… Every tour is a winner!

I am very impressed with these tours and I have done 6 so far. When I book a stay in Singapore, I check Jane’s calendar for my next experience. The groups are small, the guides are well informed and the itineraries are well thought out. I have discovered an interest in places that I have previously walked past. I look forward to learning more about the varied parts of Singapore.

I have been on many of Jane’s SG Tours and Events and every one has provided not just show and tell, but real insights into the architecture, the culture and the people. I have lived in Singapore for over 20 years and am well read about its history, but still find Jane’s Tour Guides provide me with insights and information of which I wasn’t previously aware. The research that is behind many of the activities is clearly immense and I particularly love hearing stories about the people who lived in the places we are seeing. 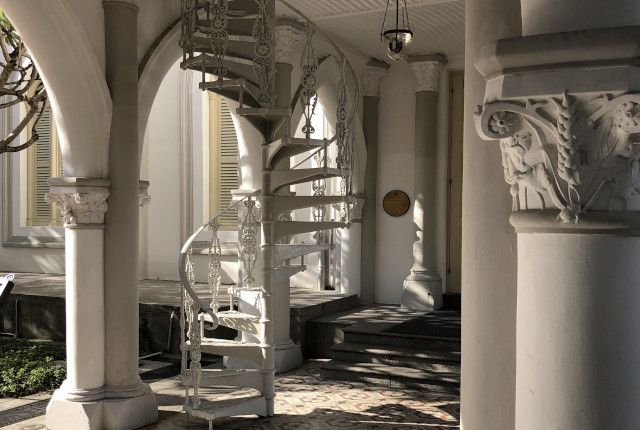 Our “Secret Singapore” tour of the Bras Basah area will shed light on some pieces of the past you’re probably not aware of, from an elaborate building façade that once housed an early 20th-century car dealership to the place where a prison and an expansive laundry production line once stood.