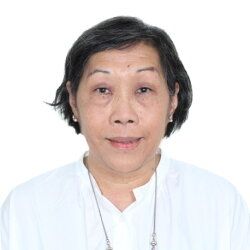 Whilst she enjoyed studying both ancient & modern history in high school, Swee Lin also learnt her country’s past by roaming around a Singapore that had not yet been touched by major land reclamation or by the ever encroaching limbs of infrastructure construction equipment. She still remembers original beaches with their groves of casuarina trees, sans shopping centres! And eating satay at the original Satay Club.

After spending years in legal practice including in places which she considers “the most colourful and fascinating districts of Singapore“, she found herself in Indonesia where she reconnected with the Indonesian portion of her mixed heritage.
Returning to Singapore, she fell into guiding quite by accident, thanks to a fortuitous Friends of the Museum membership gift one Christmas! She started guiding at The Peranakan Museum, and has never looked back since.

Besides guiding, together with her husband she has published 2 photo books – one on Singapore’s Chinatown, and another on its Little India and Kampong Glam neighbourhoods. She also contributes articles to various publications including the Asian Geographic magazine .

Speaks a small amount of German