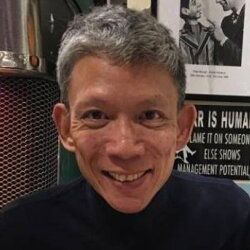 Simon embarked on his exciting and seemingly endless learning journey right after his National Service. A golden opportunity to escort Singaporeans to Australia, New Zealand, the US and Western Europe, formed the start of his decades-long journey within the travel business.

Armed with the ethos that “he who isn’t curious isn’t interested,” he dove into pre-Internet research and learned on the job, never shy to ask questions of coach captains, restaurants, hotels, etc, to discover as much as he could about the local terrain.

After several years of traveling and escorting groups, he spent a decade in a travel agency, before returning to his first love — guiding. But this time with his feet on the native soil of the land of his birth and childhood, Singapore.

Marrying his perspective as a true blue Singaporean to his international experience, Simon feels he is in a great position to bridge this gap, and deliver the Singapore story in a concise and comprehensible way to people of all nationalities and backgrounds.

While as a National Serviceman he had questioned having to sacrifice 2.5 years of his youth doing push-ups and living off the jungle, his rekindled passion for guiding led to Simon researching Singapore’s painful surrender in 1942 and learning all he could about this period of history, guiding many curious visitors to our historical war sites.

As a Peranakan (Straits-born Chinese), he has picked up several different Chinese dialects plus few words of Malay; and his soulmate put him through a crash course of Teochew!