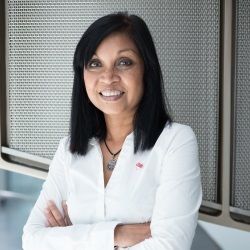 Shanti is a Singapore Tourist Board Licensed Guide in English, French, and Russian.

Shanti was born and grew up in Singapore in the 70s, worked in Paris for H.E. Mr David Marshall in the 90s, and following that, lived 20 years in Moscow during the heady days of glasnost and perestroika!

During her time in Paris and Moscow, she organised and conducted various cultural and walking tours, raised funds for orphanages and hospitals by organising bazaars involving up to 130 foreign embassies, and held ex-co positions in various Women’s Groups like International Women’s Club and Asia-Pacific Women’s Group.

In 1985, Shanti set up and managed the Peranakan Museum in Emerald Hill Road where she worked for several years. During this time, she also performed in Peranakan-themed stage shows and theatre.

She is back in Singapore seeing her son through National Service and makes regular trips to Moscow where her husband still lives and works.

We traveled to Singapore with a group of 6 friends and did an extremely informative tour with Shanti. She was very knowledgable about all aspects of Singaporian history and cultural life. It was a great highlight of our days while visiting this city and really helped contextualize a city that, on the surface, feels like it was just born yesterday. She gave an informative historical overview, while also revealing many interesting aspects of daily modern life in Singapore. I highly recommend this tour.

OliviaSorman - Trip Advisor
Shanti answer all my curiosity about Deepavali

I register for the tour last minute but Jane’s SG Tour was prompt with the reply and details of the tour. My guide Shanti answer all my curiosity about Deepavali festival and she also share with me her Dhal recipe. I get to know about the different type of Indian vegetables for cooking Indian cuisine and the tradition that Hindu practice during Deepavali. I enjoyed the Indian vegetarian dinner after a nice walk at Little India.

We spent a thoroughly enjoyable evening with Shanti who admirably coped with getting a fair sized group through large crowds, visited interesting shops, temples and finished up with a delicious curry dinner, thankyou for a lovely evening!

Yet another successful Jane’s Tour, looking forward to the next one on Tuesday.

Claire PC, TripAdvisor
Terrific morning, with Shanti as our guide

Jane’s Tours arranged a walking tour for a group of 5 of us, combining black and white houses in Goodwood Hill with the gorgeous Emerald Hill shophouse area. It was a terrific morning, with Shanti as our guide. Shanti’s great strength was not only her intimate knowledge of these areas, but her ability to share her childhood memories of growing up in Singapore. Shanti was immensely helpful and our favorite moments included the relaxed pace of our visit to such exquisite neighborhoods and the fascinating social and historic information we were provided with. It has helped me to view Singapore quite differently! Thank you to Shanti and Jane’s Tours.

A.Ross, TripAdvisor
I would highly recommend

We have just got back from a 2 hour trip with Shanti looking at a selection of black and white houses in Goodwood – huge amounts of fun.

Not only was it stunning to see all the houses in their grounds but also the history behind the houses was fascinating. Shanti was attentive, informative and kept a great pace throughout the tour.

I would highly recommend.

She was extremely knowledgeable about the area, artists, arts and architecture.