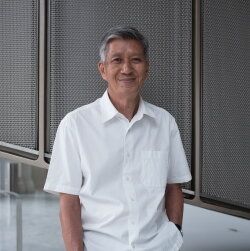 Joe is a born and bred Singaporean, and like many fellow countrymen of his generation, has seen a huge amount of change to his homeland as it has progressed from Third World to First. Tangible changes include singing 3 national anthems: “God save the King/Queen” (under the British), “Negaru Ku” (when Singapore was part of Malaysia) and since 1965, “Majulah Singapura”!

In a varied career spanning 50 years he has worked in the Singapore Civil Service, had a 25 year career in the Singapore Armed Forces, including 3 tours of duty as a Commanding Officer in the Air Force, and a stint as a stockbroker. His latest passion is Tour Guiding.

Joe is most at home with nature, having grown up in a village on the edge of a mangrove forest, and indulging in such activities as catching crabs and fish with his bare hands and climbing trees like Tarzan (Jane & he get on well!).

He experienced first hand the traumatic days immediately after the Japanese occupation when food was scarce. He was brought up on tales of horror and suffering by village folks who survived the Japanese invasion and the fall of Singapore. This, coupled with his experience in the SAF, enables him to give a consumate and very personal account of events leading to the leading to the Fall of Singapore, and the over 3 years of life under the Japanese occupation.

In addition to exploring the impact of WW2, Joe can show you our “heartlands” including the best places to sample our many & varied cuisines.

We booked a bespoke WWII tour in Singapore through Jane. Our guide, Joe, was a retired officer from the Singapore Air Force. He was knowledgeable and did a great job during the 6 hour tour. This was a custom itinerary, including a visit to the old Ford factory, where the British surrendered to the Japanese. We travelled in comfort in a Toyota minivan with captains chairs.

We went on a private WW2 tour with Joe. It covered many places that we didn’t know exist in Singapore.

The WW2 stories that Joe shared were also very interesting and we won’t know from reading.

M.D.- TripAdvisor
We thoroughly enjoyed our guide and walking tour!

Wonderful and a great way to see Singapore! The weather was marvelous and the other members were nice and they were also interested in history. Our guide Joe, was very informative, not only on what happened during those terrible wars years but he had loads of information about local Singapore’s rich diverse history and customs. We have taken Jane’s tours before and will continue to enjoy them in the future. All the best!

I recently went on a wonderful WWII tour organized by Jane’s SG Tours. It was great!

Our tour guide, Joe, was outstanding and knowledgeable! We all look forward to part II of the tours.